Eco ice at the Hanover Fair 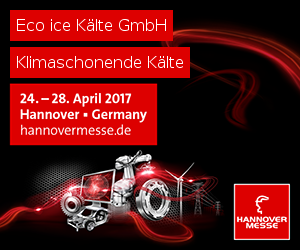 As a global innovation, Eco ice has launched a solution for the energy-efficient use of high-quality deep-freeze cold, which is released during the regasification process of LNG, and presents it for the first time at the Hanover Fair 2017 from the 24th to 28th of April.

The patented Eco ice regasiﬁcation system uses a cold source that accumulates along the way with no additional cost.

Natural gas (NG) in its normal state is a gaseous, i.e. voluminous fuel. To downsize natural gas, it must be cooled down to -162°C so that it is transportable. The gas becomes a liquid – LNG (Liqueﬁed Natural Gas), which requires only one six-hundredth of its original volume. LNG can be much better stored and transported as a gaseous natural gas as a result of this reduction in volume. LNG is often stored in what is called a satellite system (double-walled, vacuum-insulated storage). In order to use the natural gas from such a satellite system as a fuel, it must again be converted into a gaseous state. This process (also called regasiﬁcation) produces valuable cooling energy.

back to news overview